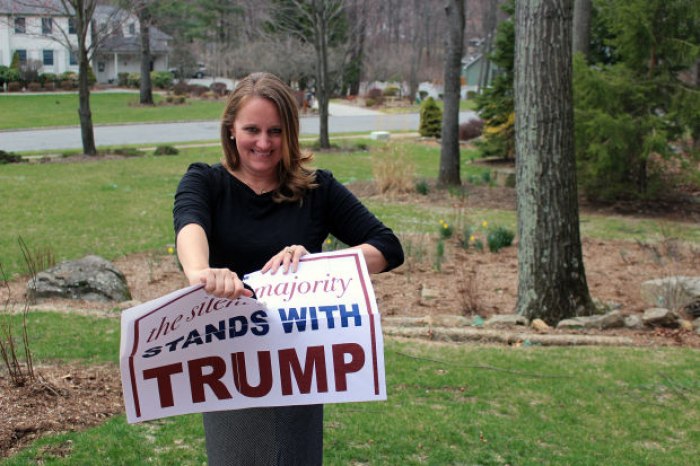 Even Trump's most trusted advisors didn't expect him to fare this well.

Almost a year ago, recruited for my public relations and public policy expertise, I sat in Trump Tower being told that the goal was to get The Donald to poll in double digits and come in second in delegate count. That was it.

The Trump camp would have been satisfied to see him polling at 12% and taking second place to a candidate who might hold 50%. His candidacy was a protest candidacy.

It pains me to say, but he is the presidential equivalent of Sanjaya on American Idol. President Trump would be President Sanjaya in terms of legitimacy and authority.

And I am now taking full responsibility for helping create this monster — and reaching out directly to those voters who, like me, wanted Trump to be the real deal.

My support for Trump began probably like yours did. Similar to so many other Americans, I was tired of the rhetoric in Washington. Negativity and stubbornness were at an all-time high, and the presidential prospects didn't look promising.

In 2015, I fell in love with the idea of the protest candidate who was not bought by corporations. A man who sat in a Manhattan high-rise he had built, making waves as a straight talker with a business background, full of successes and failures, who wanted America to return to greatness.

Last summer, I signed on as the Communications Director of the Make America Great Again Super PAC.

It was still early in the Trump campaign, and we hit the ground running. His biggest competitor had more than $100 million in a Super PAC. The Jeb Bush deep pockets looked to be the biggest obstacle we faced. We seemed to be up against a steep challenge, especially since a big part of the appeal of a Trump candidacy was not being influenced by PAC money.

After the first debate, I was more anxious than ever to support Trump. The exchange with Megyn Kelly was like manna from heaven for a communications director. She appeared like yet another reporter trying to kick out the guest who wasn’t invited to the party. At the time, I felt excited for the change to the debate he could bring. I began realizing the man really resonates with the masses and would bring people to the process who had never participated before.

That was inspiring to me.

It wasn't long before every day I awoke to a buzzing phone and a shaking head because Trump had said something politically incorrect the night before. I have been around politics long enough to know that the other side will pounce on any and every opportunity to smear a candidate.

But something surprising and absolutely unexpected happened. Every other candidate misestimated the anger and outrage of the “silent majority” of Americans who are not a part of the liberal elite. So with each statement came a jump in the polls. Just when I thought we were finished, The Donald gained more popularity.

I don't think even Trump thought he would get this far. And I don’t even know that he wanted to, which is perhaps the scariest prospect of all.

Ignoring the fact that at the time Trump tweeted this (time-stamped 4:37 p.m.) the latest news reports had already placed the number differently at 70 dead, 300 injured, take a moment to appreciate the ridiculous, cartoonish, almost childish arrogance of saying that he alone can solve. Does Trump think that he is making a cameo on Wrestlemania (yes, one of his actual credits)?

This is not how foreign policy works. For anyone. Ever.

Superhero powers where "I alone can solve" problems are not real. They do not exist for Batman, for Superman, for Wrestlemania and definitely not for Donald Trump.

What was once Trump's desire to rank second place to send a message to America and to increase his power as a businessman has nightmarishly morphed into a charade that is poised to do irreparable damage to this country if we do not stop this campaign in its tracks.

I'll say it again: Trump never intended to be the candidate. But his pride is too out of control to stop him now.

You can give Trump the biggest gift possible if you are a Trump supporter: stop supporting him.

He doesn't want the White House. He just wants to be able to say that he could have run the White House. He’s achieved that already and then some. If there is any question, take it from someone who was recruited to help the candidate succeed, and initially very much wanted him to do so.

The hard truth is: Trump only cares about Trump.

And if you are one of the disaffected voters — one of the silent majority like me — who wanted a candidate who could be your voice, I want to speak directly to you as one of his biggest advocates and supporters.

In fact, many people are not aware of the Trump campaign's internal slogan, but I will tell you. It is stolen from a make-believe television presidency onThe West Wing where Martin Sheen portrayed President Bartlet. The slogan on the show amongst the idealistic group of Bartlet's staff was “Let Bartlet Be Bartlet.”

Inside the Trump camp, the slogan became "Let Trump Be Trump."

It is a repurposed slogan that seemed spot-on for the candidate. He is an intelligent, charismatic man who is involved in every aspect of his organization and would rather speak from the cuff than read briefing notes and recite them. I, in fact, admire Trump for this. But saying this qualifies him to be president is like saying that Seth Rogen is suited to be president. Another extraordinary improvisor, not an extraordinary presidential candidate.

Trump has undoubtedly lived up to the slogan, right down to his main public-relations liaison. Rather than go for a focus-group Washington insider, his communications person had previously taken press calls for the Trump Organization and directed them to the appropriate Trump child. She joked that before joining the campaign she thought "Common Core" was a class at Equinox.

The primary problem with this? What I've seen the longer I've helped prop him up along with the millions who are helping Trump is that we got the slogan wrong. A more accurate internal slogan would read, "Let Trump Help Trump."

I don't dismiss any single Trump constituent, which is why I believe it's important to let you know that the candidate does.

I, too, think our country has gone off track in its values. I, too, think that we need a dramatic change of course. But I am, in my heart, a policy wonk and a believer in coming to the table with necessary knowledge for leading the free world.

The man does not know policy, nor does he have the humility to admit what he does not know — the most frightening position of all.

I remember watching the second Trump debate and thinking, After this, he is going to have to start hammering it home on policy; the country needs substance to make an informed decision.

I wished for it six months ago and am still waiting for it today. He had an opportunity after the terror attacks in Belgium and instead he used the opportunity to talk about closing the borders and what a mess that country had become. I was appalled that he offered no condolences or words of support; he merely gave his "build a wall" stump speech and talked about his greatness.

I felt sad for him at that moment.

And now, with the latest horrifying terror attack in Pakistan, my sadness has turned into anger.

I consider myself a part of the silent majority that led to Trump’s rise, which is why I want you to know that I am with you — I wanted Trump to be real, too.

He even says so himself. His misogyny? That's the character.

His presidential candidacy? That's a character, too.

The problem with characters is they are the stuff of soap operas and sitcoms and reality competitions — not political legacies.

Trump made me believe. Until I woke up.

And he has no problem abusing your support the same way he cheated hard-working men and women out of millions of dollars, for which he is now being sued.

I came into this eager to support a savvy businessman who received little outside funding. I loved Trump's outsider status. But a year has now passed since I was first approached to become part of Team Trump.

While the pundits pontificated about what type of PR stunt Trump had up his billion-dollar sleeves, I met with people who convinced me he was serious about changing the political conversation. I wanted to raise millions for him. I wanted to contribute to millions of votes.

But something was shifting.

Without intending to do so, I began to hear and evaluate him more critically and skeptically as a member of the voting public rather than a communications person charged with protecting his positions.

I no longer felt that he was the leader the country was looking for, and I found myself longing — aching, really — for policy substance that went beyond building a wall and making Mexico pay for it. What were once bold — although controversial — statements now seemed to be attempts to please the crowds, not direction to lead this country to a better place. I began to realize his arrogance and isolation had taken over and were now controlling his message.

And here's what he tapped into: the unprecedented, unbelievable anger.

Because we are all angry — and we all have a right to be. But Trump is not our champion. He would stab any one of his supporters in the back if it earned him a cent more in his pocket.

Unfortunately, the more vitriolic Trump has become, the more the people responded to him. That drove him to push the boundaries further and further.

I also started seeing a trend of incompetence and deniability.

Imagine Trump wronged you, even in the smallest possible way. He would go to the grave denying he had ever done anything wrong to you — ever.

Trump acts as if he's a fictional character. But like Hercules, Donald Trump isa work of fiction.

No matter how many times he repeats it, Trump would not be the "best" at being a president, being in shape, fighting terrorism, selling steaks, and whatever other "best" claim he has made in the last 15 minutes.

He would be the best at something, though. He is the best at looking out for Donald Trump — at all costs.